How is summer turning out for the top tourist destinations in Greece?

We already have a first picture for the summer of 2019 and Cardlink pulse is ready to reveal the info! May and June may foretell what will follow, which is why we analyzed data from millions of transactions* in our network and present the results. The tourist regions we examined are the Cyclades, Crete, Chalkidiki, the Dodecanese, the Sporades and the Ionian Islands. In which region are hotels performing better? Is there a strong player you did not expect? What changed for Crete on the 11th of May? The suspense about how the summer will turn out in the country’s top tourist destinations is climaxing.

There is money changing hands, but where is it going?

If you own a business in one of the above tourist regions in Greece, if you are thinking of starting a business in one of them, or if you are simply curious, it is definitely very interesting to known which region has the largest share of the total market turnover. The data in the graph that follows refer to all sectors and the total turnover of these regions for May and June 2019. 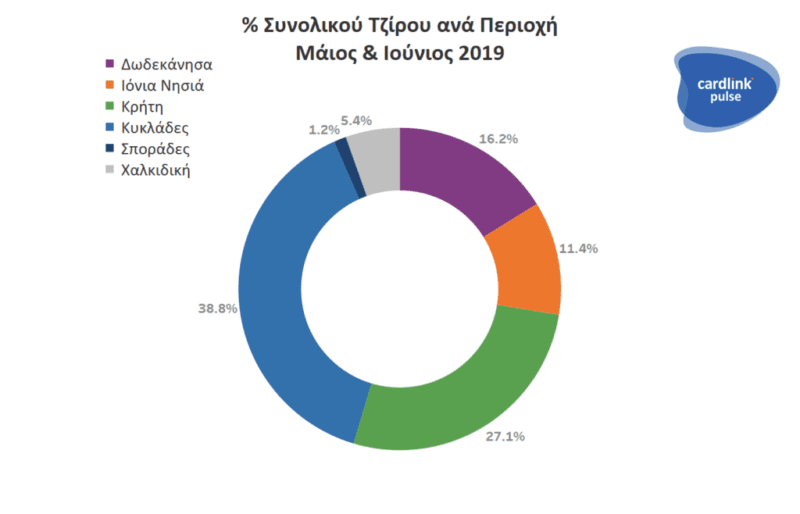 Cyclades are clearly first, gathering 38.8% of the total money spent in the regions being examined, with Crete following with a difference of more than 10%. Did you see it coming? It is very interesting to compare these percentages and find, for example, that Crete has a higher percentage of turnover than the Dodecanese, the Sporades and Chalkidiki together!

If all aspects of analytics are examined in full detail, it is certain that you will draw conclusions that will change the manner in which you think. Let’s see then what happened on a daily basis to the turnover in each of the regions we are examining for this past May and June.

It is impossible not to notice the “battle” between Crete and the Cyclades. The dominance of Crete in the beginning of May lasts a short while, however. From the 11th of May onward, it does not manage to exceed the Cyclades on any day until the end of June. One more point. It appears that businesses in Crete close on Sundays and that explains the sharp decreases noticed in turnover on those days. Could it be that if somebody opens their business in Crete on Sundays they will have an opportunity to grow? Or could it be that the high volume of tourism compared to the number of permanent residents keeps businesses open on Sundays in the Cyclades?

In this video we gathered similar examples for you, on how you can turn the data you see in Cardlink Pulse into important decisions for the development of your business!

Of course, it is normal for turnover to increase in tourist areas in June, as it is customary. However, a slight increase is different to a twofold one, isn’t that so? And of course, the conclusions drawn and the questions that arise are different as well. 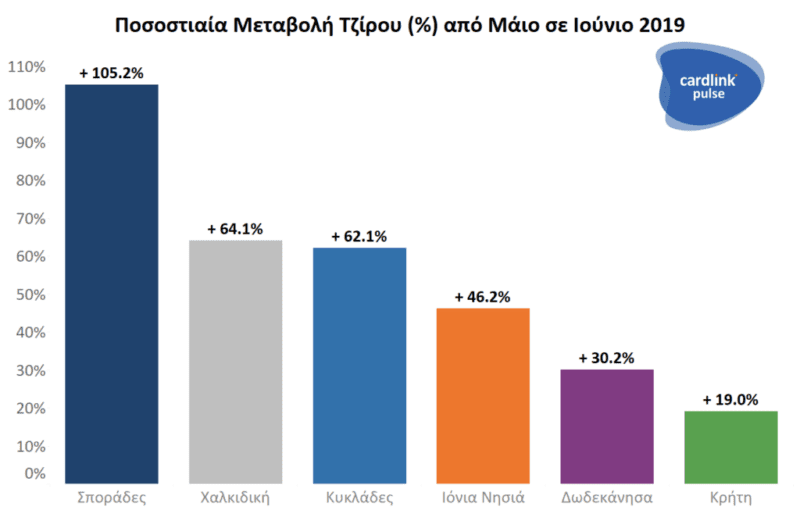 105.2% and more than a twofold increase for the turnover in the Sporades and just 19% in Crete, which is certainly due to the fact that Crete has permanent residents, unlike the Sporades. Could it also be due to the fact that Crete has tourism all year around? Chalkidiki and the Cyclades increased their turnover by more than 60% in June and we will be monitoring their data with great suspense to see what will happen in July and August!

Which other sectors do your customers spend money in? 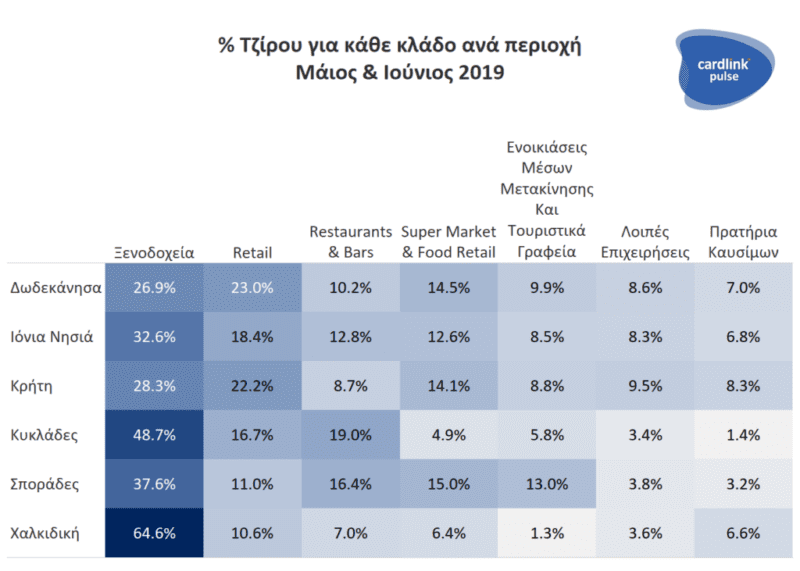 A lot of information can be derived from this table and everybody can spend as much time as they wish in order to analyze it and draw important conclusions. We will focus on some key points:

In Cyclades, of course, with 19% of their total turnover being spent in bars and restaurants.

As expected, in places with long distances, i.e. in Crete and not the Cyclades where just 1.4% of their total turnover is spent in petrol stations.

It is the top source of revenue as evidenced by the overwhelming 64.6% which larger than all other regions!

In Chalkidiki, of course; where else? Visitors appear to reach it using their own means of transportation.

The largest percentage of the sector seems to be in the Dodecanese, but it is interesting to notice that the differences among the regions shrink if we look at the supermarkets & food retail sector.